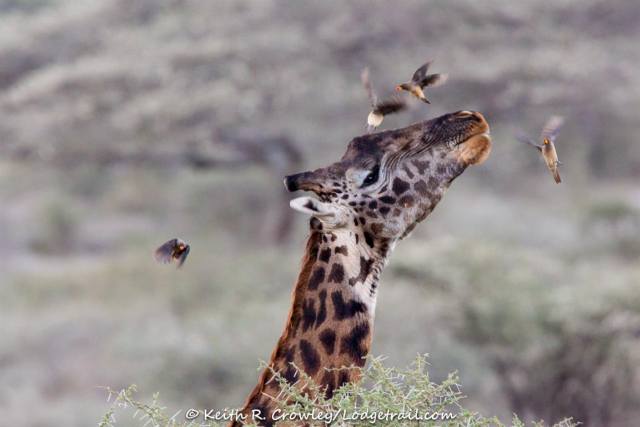 Our opening photo is from Keith Crowley, of Lodge Trail images, taken on a recent safari to Ndutu. Of mutual benefit to each other, the giraffe and ox-pecker go hand in hand… why? Because the giraffe hosts a whole range of ticks and flies, which provide a juicy meal for the ox-pecker. They tolerate the ox-pecker’s foraging and it can be quite humorous to see just the places the ox-peckers venture – in ears, up noses… and other places too you might not want an ox-pecker to go! Every so often the giraffe gives a mighty shake of his head sending them all flying, but seconds later they land, and continue the feasting.

High season is over the hump and we are now on the gradual slide into quiet months. We are fortunate to have had a busy 3 months, when tourism in general in Tanzania is experiencing some quiet times. Our loyal supporters return year after year, bringing their own friends, guests and clients, and it is like welcoming good friends back into your home. We marvel at how fast the year has passed, share news of home and family, and enjoy their enthusiasm as they rediscover the wonders of the Serengeti. The staff are also happy to see faces they know, and to be recognised and remembered themselves. Our staff are our biggest asset, we value them immensely and appreciate the positive feedback from our guests.

When Aadje finished her newsletter at the end of October, we assumed the dry season was almost over. Here we are at the end of February and the rains have only just started. The wildebeest are spread right across the southern and western parts of the Serengeti, and the calving is sporadic and happening on the southern plains. It is fascinating to watch and learn how the changing of the weather patterns and seasons effect the wildlife. It will be some months before the effects of the long dry on the wildebeest calving will be seen and understood.

Following on from the El Nino of 2015/2016, we have experienced the opposite: La Nina, waiting for the rain all through December, January and February. The drought has been spread all across northern Tanzania and well into Kenya too. Although the traditional short rains started on schedule in November, they quickly petered out almost nothing, and we were back to being caked in dust. The rainfall records are kept up to date on our website, but in brief, as a comparison:

Good explanations of La Nina can be found here

Following their noses, where the tiniest juiciest green blades of grass led them, two zebra for many days were spotted in every corner, nook and cranny of the lodge, oblivious to work going on around them, and barely even batting their long eyelashes if someone walked past. For once I had wildlife outside my office window, and they even ventured through the gate into the kitchen garden. 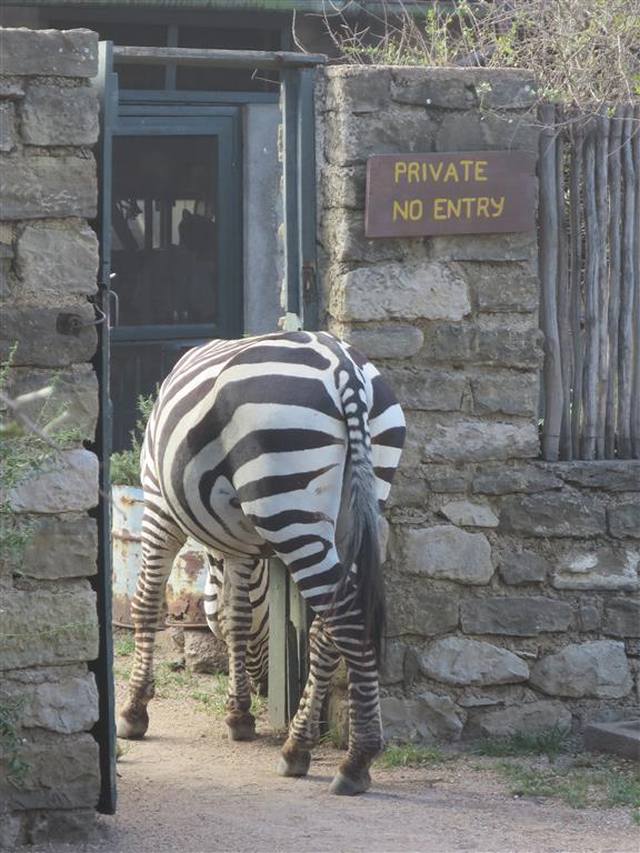 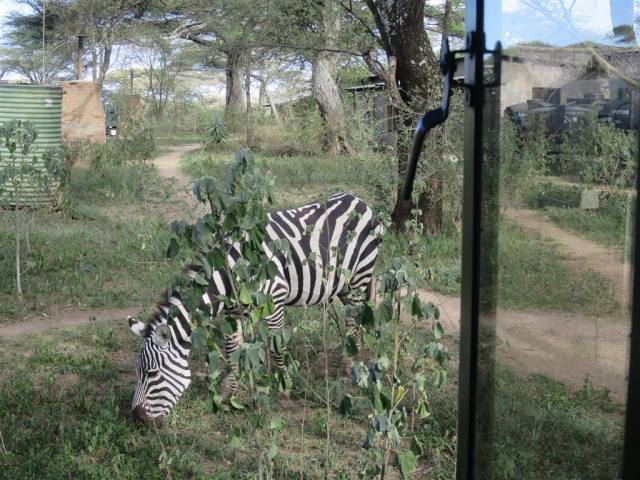 Flowering of the Acacia trees

An unexpected occurrence in the drought this year was the abundant and simultaneous flowering of the Acacia trees, covered with small, often fragrant flower clusters that look like pom-poms, almost glistening, like snow crystals against the blue sky. The flowers when they fell were blown into large snow like drifts against buildings and around tree trunks. If any of these little flowers make it into the water tanks, the effect is disastrous! The water becomes tainted with the most horrendous smell, totally unusable, either for showering or drinking! The water then needs to be drained away, the tank cleaned, sterilised and aired before reusing. It’s heart-breaking to watch that precious water spreading out across and soaking into the dusty earth! 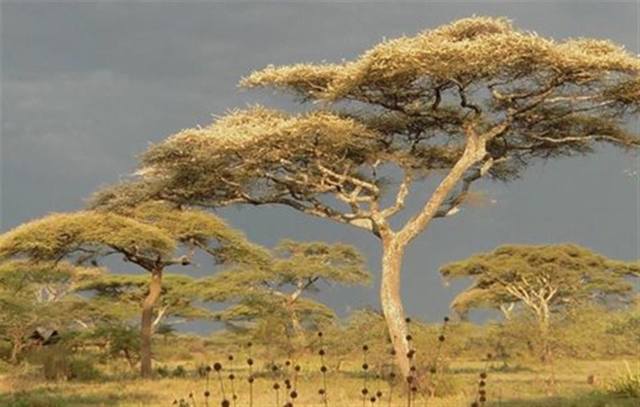 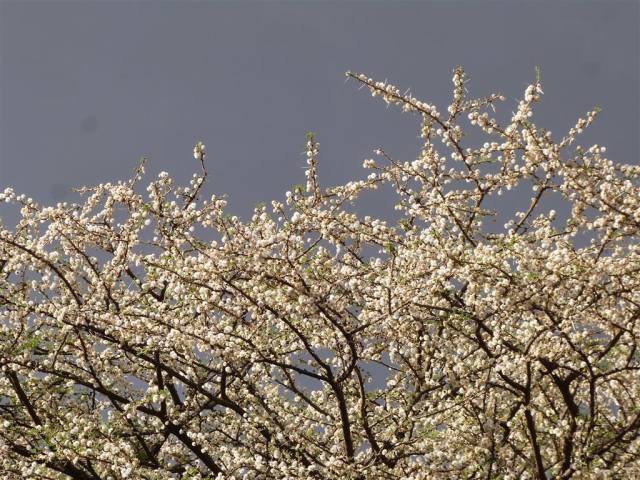 Early December we had an invasion of these wonderful quirky beetles; each evening the dining room and bar would be inundated with low flying, slightly out of control black beetles, the resultant shrieks from guests indicating that yet another one had crash landed into a lap. I seemed to spend every evening on Dung Beetle Patrol, rescuing those that were stuck upside down with legs waving in the air, and returning them outside to the dirt where they belong, and reassuring guests that although large and noisy they were in fact harmless.

So, what’s so great about dung beetles I hear you ask.

Dung Beetles perform a vital role on Africa’s Serengeti Plains providing a highly efficient waste disposal service. Without their work animal waste would swamp the plains. They are mighty recyclers! Following the wildebeest and zebra, they burying the dung, loosening and nourishing the soil and helping control fly populations. 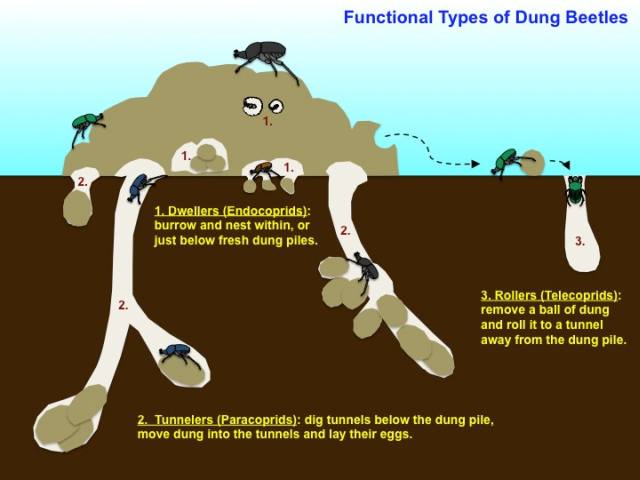 Scientists group dung beetles by the way the beetles make a living: rollers, tunnelers, and dwellers. Rollers form a bit of dung into a ball, roll it away, and bury it. The balls they make are either used by the female to lay her eggs in (called a brood ball) or as food for the adults to eat. Tunnelers land on a manure pat and simply dig down into the pat, burying a portion of the dung. Dwellers are content with staying on top of the dung pat to lay their eggs and raise the young. 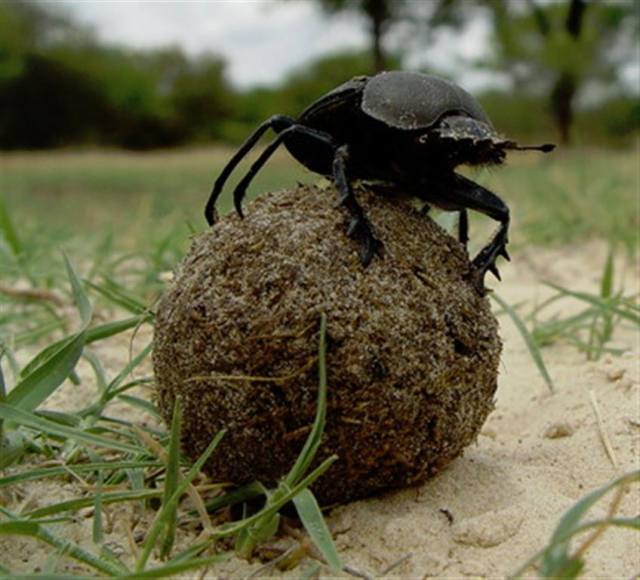 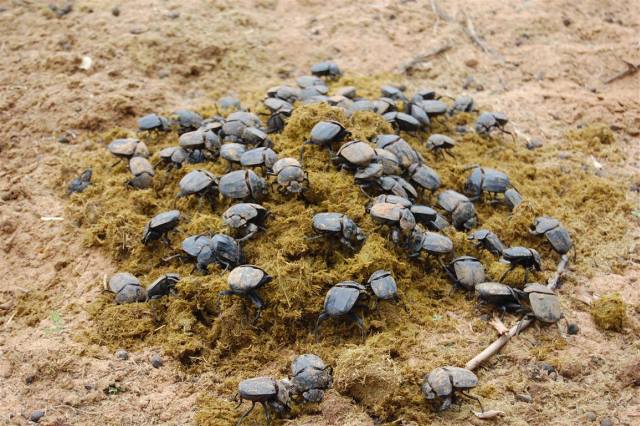 If you have a fascination with dung beetles like I do, you may find these links interesting:

Hunter and the hunted

Watching the hunter and the hunted while on safari, is often a highlight, and a rare sighting of a hunt with a difference, was spotted by guests out on safari recently with Hamisi. They came across a large python devouring an adult Thompsons Gazelle. They watched the snake slowly ingesting the gazelle, swelling to several times it’s normal size. Now, that made entertaining fireside talk. 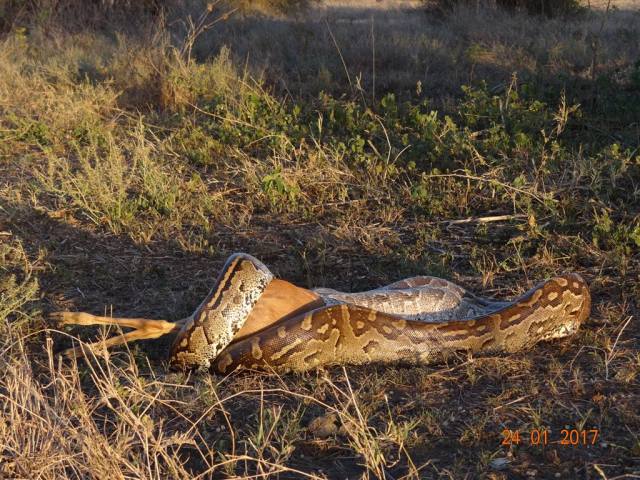 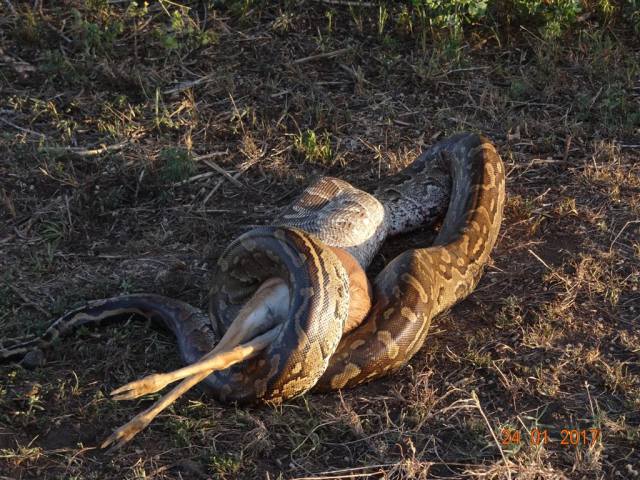 I am always worried about meeting a snake on my walks around the lodge but I have learnt to be alert to the alarm calls of the birds. Usually it is just a Genet, sneaking through the undergrowth, but one particular day the noise did warn me of a snake approaching. It’s flared hood identified it as a cobra, just before it shot up the tree. The Superb Starlings were beside themselves with indignation as it swiftly skimmed from branch to branch before deciding retreat from the noise was a wise option. Steve Spawls, from East African Snake Forum identified it as an Eqyptian Cobra, not often seen in our area. I have to say I was quite happy to see it go, until the staff told me it lived in a nearby tree and had been there for several months! I haven’t been brave enough to go back to check if it is still there. 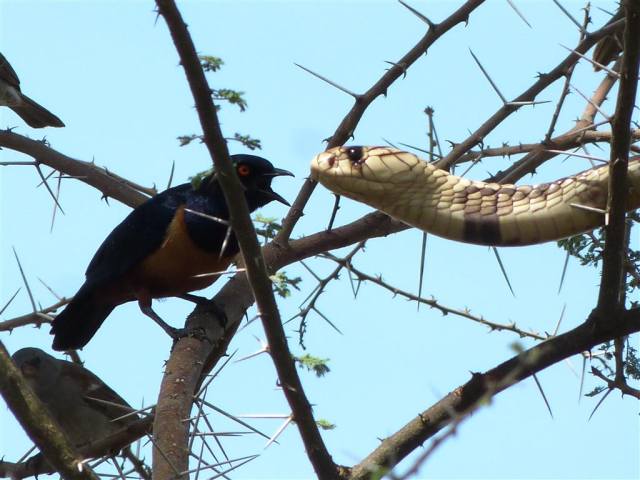 Ndutu continues to delight and intrigue with changes within lion prides. Lionesses in both the Masek and Twin Hill prides have GPS collars attached now, and the information of the whereabouts of the prides daily, gives important information to the KOPELION project, and has helped to keep these lions alive through a long and extended dry period. We have seen these prides change the boundaries of their territories as they seek safety and food away from the pastoralists and their livestock. The GPS data shows the territories of these two prides continually overlap, often in the cover of darkness, and we often wonder what goes on when they actually meet. 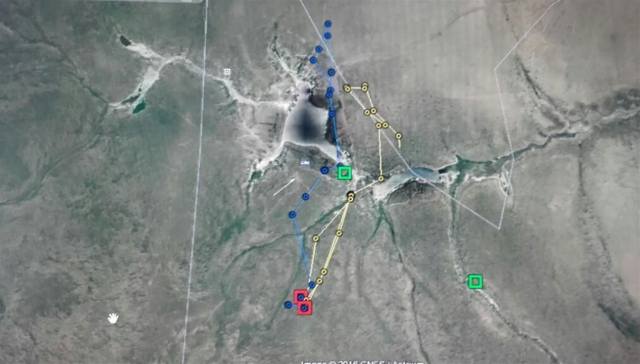 The GPS movements of Nayomi and Nosikitok, showing how close their paths come to each other

The cubs are all well grown into healthy sub-adults now, and it won’t be long until the males from these prides move off and venture out on their own. We already know that Nayomi of the Twin Hills pride has two new cubs which she expertly keeps hidden in low scrub. Katavi, the lone resident male of these two prides, continues to share himself between the two, making the most of having many lionesses to keep him well fed. 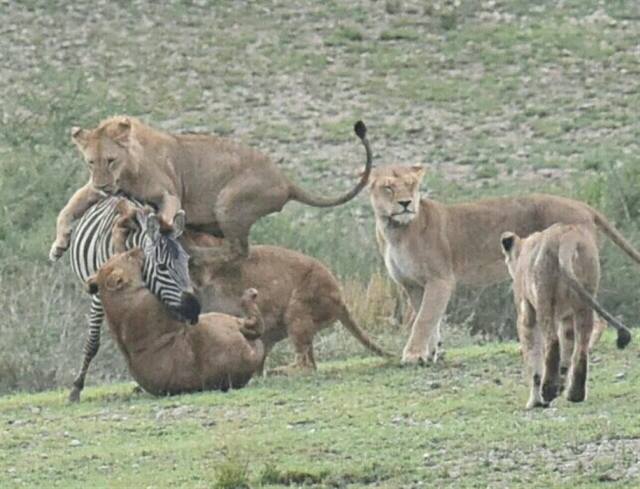 Masek pride bring down a young Zebra with Barney on for the ride. Photo Credit: Brian Pugh

The Marsh Pride at Ndutu, which has been a solid family unit is adjusting to life without three of their main lionesses. A new era for the Marsh Pride is beginning.; Spot who was killed by two invading males, probably defending her cubs, and Notch and No Name, the eldest two lionesses of the pride, having reached a wonderful age of around 17. This has left the pride quite depleted and a little lost, as only Aphrodite is left to raise 5 cubs on her own. Cassandra with her band of 9 subadults is still very much elusive and although they come and go from the marsh, haven’t teemed up with Aphrodite again.

Times change and life goes on. A new era for the Marsh Pride is beginning.

We got quite a surprise to come across Laura of the elusive Thin Pride, with her daughters Willow and Winnie, right in big Marsh last week; new territory for them too. Although they had bellies dragging on the ground they determinedly stalked and chased zebra that came down to drink, but low slung undercarriages ensured the attempt was unsuccessful.

And the Greek God equivalents of the lion world, Remus and Romulus continue to reign supreme in the Marsh Areas. Remus, often staying close to the Marsh Pride, but Romulus who has a bit of a reputation of a “ne’er do well” often strays further afield. 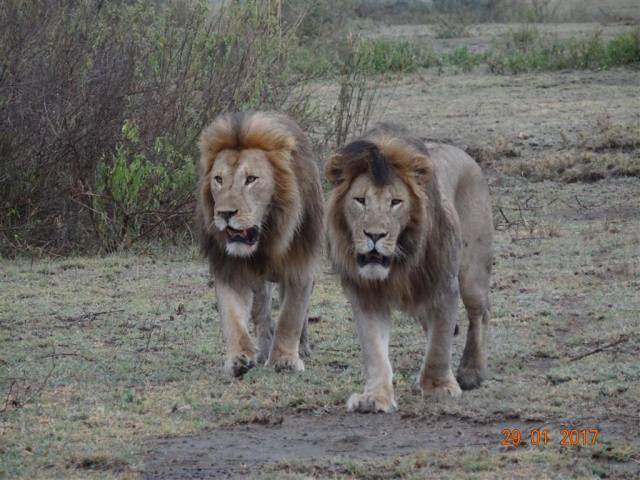 KOPELION, an organisation working in the Ngorongoro area to promote co-existence between the Maasai and the lions, has been working alongside communities for the benefit of both people and lions. This dry season past, the Ilchokuti (lion guardians) have been involved in stopping over 20 active hunts in the Ndutu area alone and we are thankful and grateful to them every day as we are able to continue to enjoy the presence of Nayomi and her pride, and Nosikitok and her pride around the lodge.

If you would like to know more about this project, their newly created website has a wealth of information and their Facebook page keeps us up to date with the daily happenings of the project. 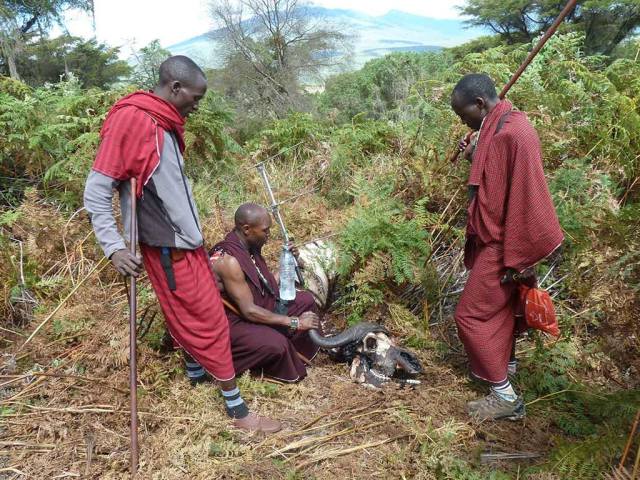 The sleek, speedy cheetah is rapidly heading towards extinction according to a new study into declining numbers. The new report estimates that there are just 7,100 of the world’s fastest mammals now left in the wild.” The latest findings on cheetah numbers worldwide, has received wide ranging coverage. Sarah Durant, a Senior Research Fellow at Zoological Society of London and also affiliated with the Wildlife Conservation Society, was co-author of the report. Sarah was at Ndutu undertaking some field work during the time of the release, and was able to give live interviews in many different countries from Russia to Turkey, from Greece to America to Iran – all from Ndutu Lodge! The article serves as yet another wake up call to act before it’s too late.

Ndutu has always been great for cheetah sightings, the wide open plains making good hunting ground. Rainy season at Ndutu, when the game is prolific, should be a time of plenty for the cheetah, a time for the mothers to ensure their young off-spring get a really good start in life. The problem is, rainy season is high season too, and for tourists the highlight of a safari is seeing a cheetah hunting.

Enthusiasm and often ignorance too, means that vehicles become a hindrance as they venture closer and closer or get between the cheetah and the prey – all for a better photo. The wildlife guidelines for the NCAA require that vehicles stay 25m away from wildlife, and sadly this is very rarely adhered to, and cars can often ruin the experience not only for other tourists, but also for the cheetah, who might only have that one chance that day to feed her family. 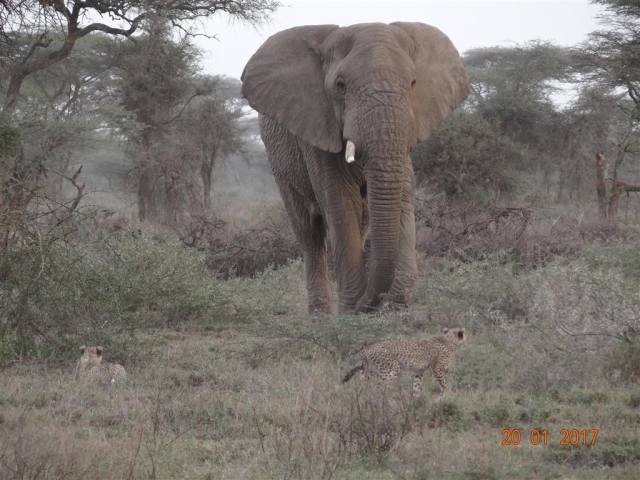 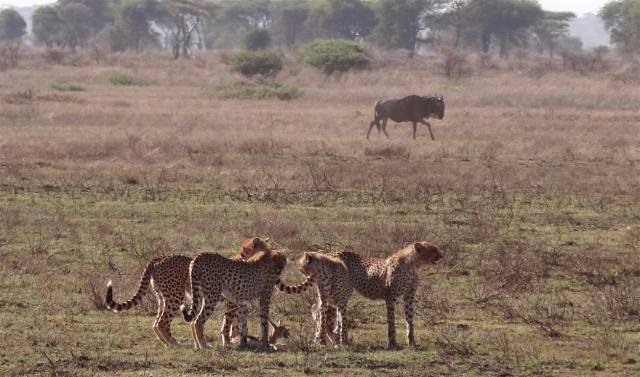