It is no secret that Margaret and I were looking for a new owner for Ndutu and, although it took a while, we are happy to announce that as of the beginning of July 2017 Ndutu Safari Lodge has changed hands.

The French have a saying: “partir, c’est mourir un peut”. Luckily, in our case there is no reason for such a drastic exit! 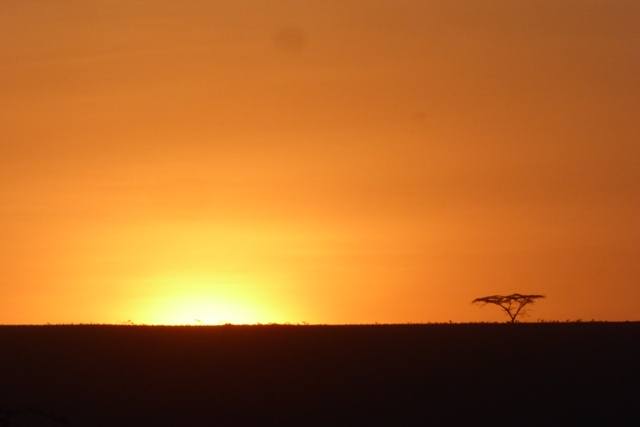 Margaret is retiring after many years of dedicated involvement in the Tanzanian hospitality industry, first with Gibb’s Farm, her well-known lodge in Karatu, and later with Ndutu when we joined forces in 1985. We owe Margaret much respect and gratitude for her invaluable contribution towards putting the lodge back on its feet and her efforts in bringing it to its present level.

I find myself in a period of transition but, thanks to the positive attitude of the new owners, I will continue to be involved. I hope to pass on some of the experience built up over the past 32 years in running the lodge and that it will be of help during the transition.

What I had not fully realized is that both Margaret and I are “getting on”, and time these days seems to speed along ever faster.

Most importantly, Margaret and I are both happy and relieved that the current staff are all staying on and that they will be able to continue their good work at the lodge. It is to them too we owe lots of thanks for the part they played in the success Ndutu Lodge has enjoyed for so many years!

And, while the process of finding a responsible party to take over from us was on-going, the clock ticked on steadily, which enabled us to come to terms with changing times.

The new group of owners are all ardent conservationists with a profound love of nature. Some are already involved in tourism and they will no doubt add their share of knowledge and experience to caring for Ndutu Lodge in the future. These are exciting times, with changes happening fast and I feel strongly that new input, new visions and fresh energy will greatly benefit the lodge.

Cyberspace has no doubt gained huge momentum in the running of businesses in general and I am the first to admit that it offers amazing possibilities for Ndutu too. Nevertheless, and my friends know, it is distinctly not my most favourite space! And it’s a reality at Ndutu – the obsession with smart phones and wifi connections and the preoccupation with having to remain “connected” at all times.

I am struggling to come to grips with the impact of social media here at the lodge. As soon as guests arrive, young and old alike, the first and often only thing that matters seems to be if we have wifi , if it works and for how long. I fondly remember the many stories from the bush, exchanges of experiences, the banter at the bar, the drinks around the fire, listening to the wonderful night time sounds and the magic view up into our beautiful dark skies – light pollution is unheard here – with millions of stars twinkling overhead.

Speaking of periods of transition, the natural world around Ndutu is also in transition with the end of the dry season fast approaching. Despite its having been an exceptionally harsh season, most of our resident wild life is still looking great. The impalas, the giraffes, the elephants, the hyenas, and dik-dik still appear healthy and happy.

Struggling to survive, however, are the poor hippos. They need to wander far from their home base in almost dried-up Lake Masek in search of food. 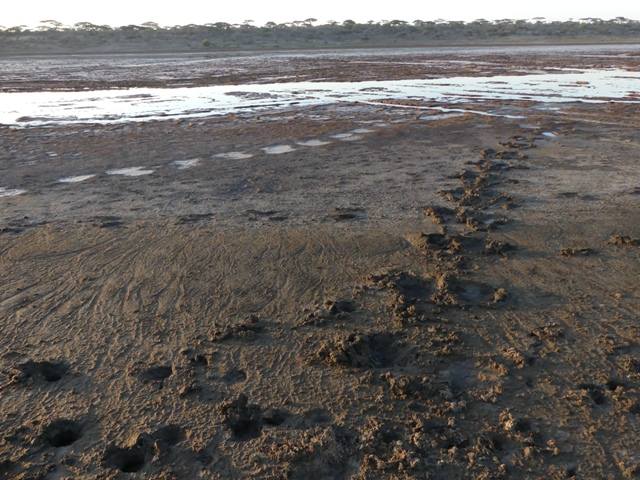 Characteristic for this time of year are their well-trodden paths leading in all directions away from their tiny muddy home in search of grazing. 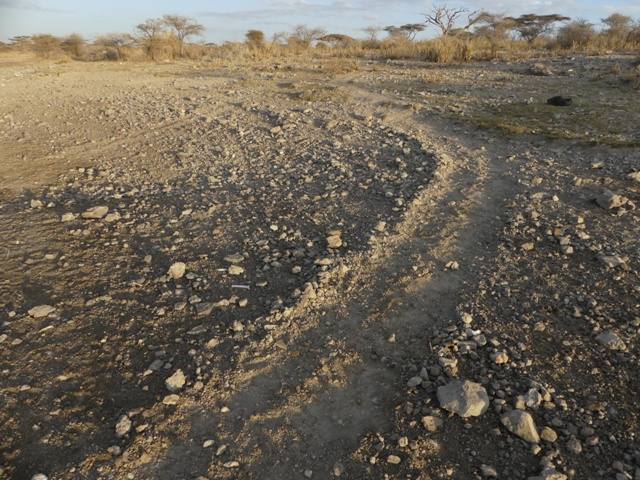 Actually, it is heartbreaking to see these huge, semi-aquatic creatures day after day trying to leave and return to their ever shrinking mud hole at the end of the lake. While their tender skins dry out in the hot sun, they go in search of grass that is almost non-existent. Their wanderings take them further and further away from Masek and exposes them to the dangers of the larger predators lying in wait! We know of two recent cases already and, if the rains delay much further, more hippos will fall victim to our resident lion prides. Last week, the four young newcomer males in the Ndutu area, killed one hippo “en route” more or less in front of lodge near the lake. 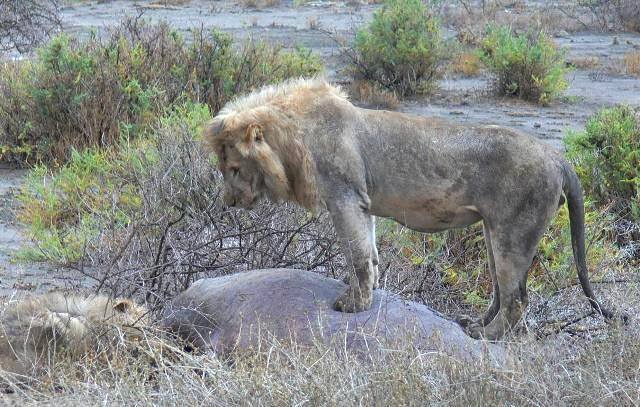 And like last year, the Ndutu lions seem to have taken to successfully hunting giraffes. At least five confirmed kills having been reported recently.

Actually, this year the lions have done particularly well, despite the pressures around them, and the Kope Lion Guardians have been actively involved in reducing lion-cattle interactions.

Nonetheless, some incidents of lions killing cattle in the area were reported. One such incident actually occurred right next to the lodge when a small herd of stray Maasai cows wandered off on their own. They walked straight into the four young males lions mentioned earlier that, unbeknown to us, were lying near our waterhole.

For other animals, at this crucial time of the year at the end of the dry months, the pods of the Acacia trees provide a wonderful alternative source of protein at times when other food has become so scarce. The fruit of the balanites tree is also a favourite during these hard times. 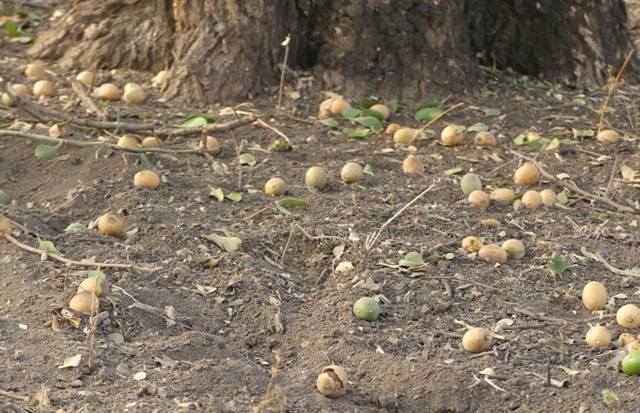 This year the giraffes were particularly keen to visit the lodge where the many beautiful mature acacia and balanites trees around the guest rooms shed their fruit. For the giraffes this proved an irresistible supplement to their food supply. 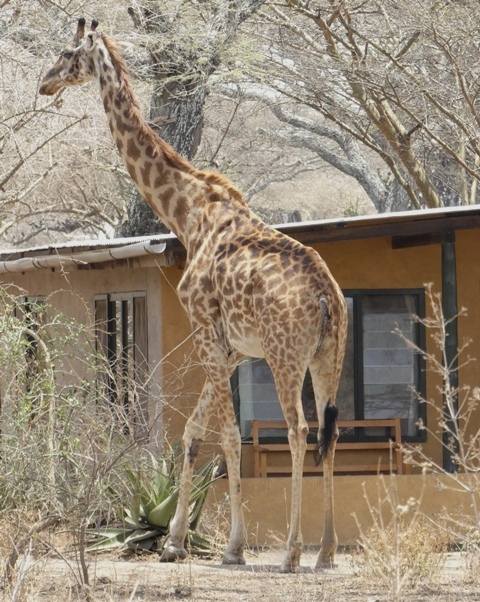 Those of us who live at the lodge all “bumped” into a giraffe on our way somewhere all the time, and from inside our homes one could not help but turn the camera on! 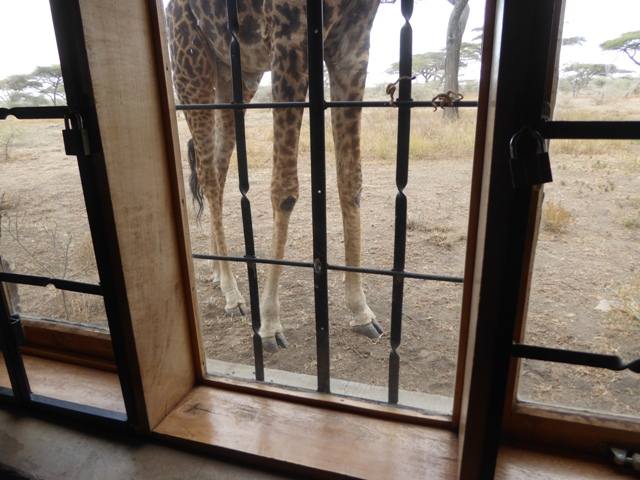 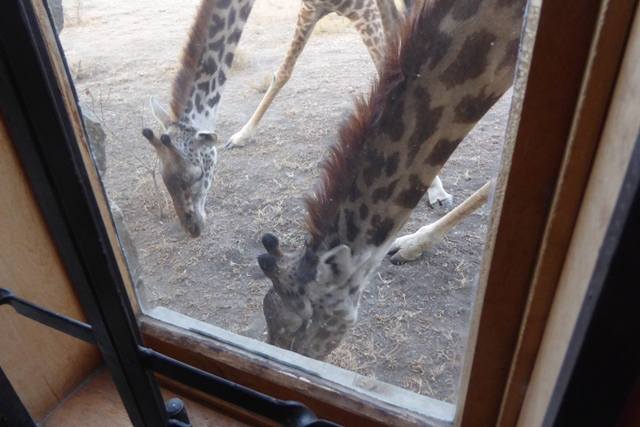 During the past four and a half months we have had a scanty five days that it rained, amounting to a total of a mere 18 mm.

Now, in mid-October, a few spectacular storms have gathered around us, with several days of huge, windswept yellow and grey dust clouds being pushed high up into the air. 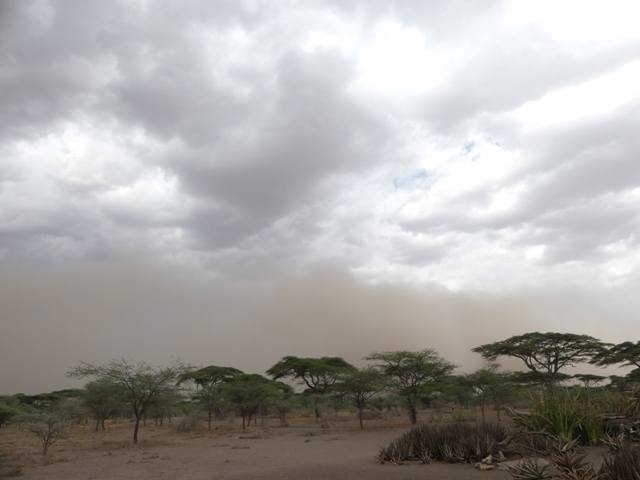 In several previous newsletters we mentioned the invasion of Gutenbergia cordifolia, a native herb that has covered vast areas of the Ndutu woodlands and plains. Interestingly, because of a different rain pattern in comparison to the year before, it seems that the growth rate of this nasty weed was stunted.  Consequently, it is so much more enjoyable to drive around to the marshes and lakes and it’s that much easier to spot the cats, the larger ones in particular, and to follow their movements. All in all less G. cordifolia results in regular sightings, which is wonderful!

Since my return mid-August from a Dutch sojourn,  I had not left the lodge until finally, a few mornings ago, a friend and I set off for an early morning drive, returning for late breakfast. We saw a leopard, a cheetah with cubs, lions, elephants, giraffes, gazelles, hyenas and a host of birds.

We parked in a spot at the Big Marsh near open water. We were amazed at the number of different bird species we saw and it was great watching the sand grouse fly in, land right next to the car and waddle over to the water. Wonderful to just sit and watch, and enjoy.

Mind you, bird watching can still be done from our dining room too. The often mentioned birdbath gala is still a daily delight until those long-awaited rains arrive in earnest! 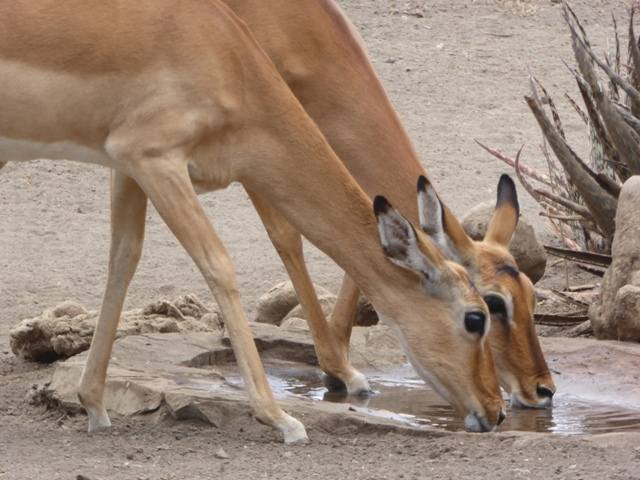 We even had a pearl-spotted owlet come over the other day, chasing all the small birds away from the water whilst it sat perched on the aloes! The bird bath also tempts dik-dik, warthogs and impalas during lunch 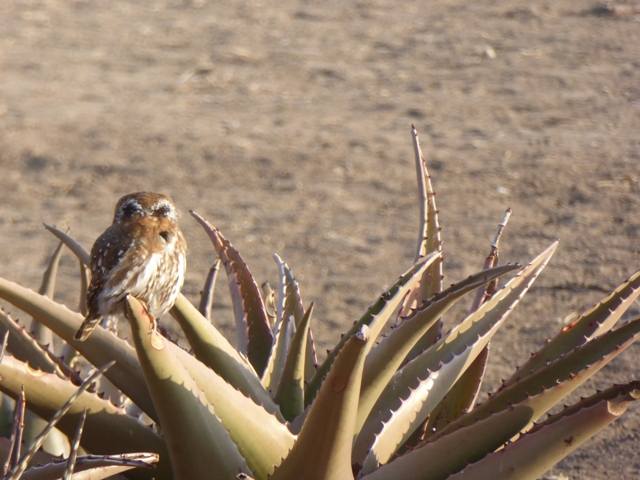 Slowly life at the lodge is starting to awaken to the arrival of rain, water tanks are being cleaned and aired, gutters checked, roofs swept and branches touching roofs cleared away.

Every morning you can hear the sound of hammers and of cement being mixed, carpentry is a hub of activity, the air filled with the smell of paint and varnish. Generally, maintenance is in full swing. Now is our chance to redo, replan, refix and refill to make sure everything is running smoothly for the oncoming season. Further afield, we continue to repair the most important game-viewing tracks around Ndutu.

This year we are sending a few of our younger staff members to two other lodges for in-house training. This initiative is much appreciated and we hope to repeat this often. Many of our staff have had hardly any exposure to other lodges and restaurants and providing them with this experience is very worthwhile. In future, we hope to reciprocate.

Before we know it the festive high season, which is the busiest time of the year in Ndutu, will be upon us.  And, as always, the 20th of December seems to be D-day, with all our operations suddenly going into overdrive!

We look forward to welcoming you again to another successful high season. May the new rains return all the migratory birds to us soon, and may they lure the wildebeest back to their favourite stamping grounds on the short-grass plains around us. 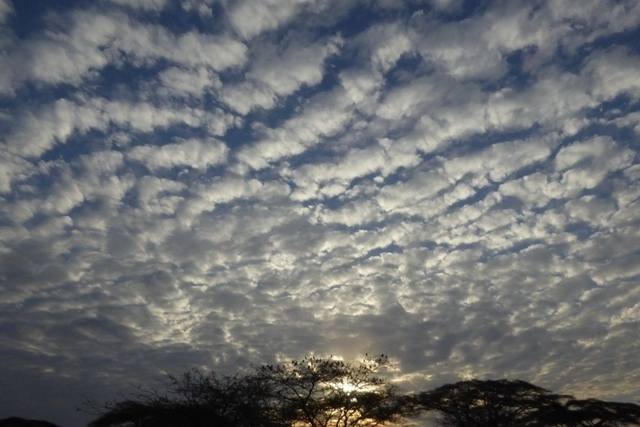