The months since the last newsletter have been times of contrast; from the long dry season which saw Lake Masek dry up and the poor Hippos reduce in numbers drastically from starvation, to now, wet soggy April – an April of the old days I am told; a good old fashioned rainy season crashing with thunder, giant cumulus clouds towering over the plains, and abundance of wild-flowers carpeting the woodlands, stampeding wildebeest through the night and of course, the mud. 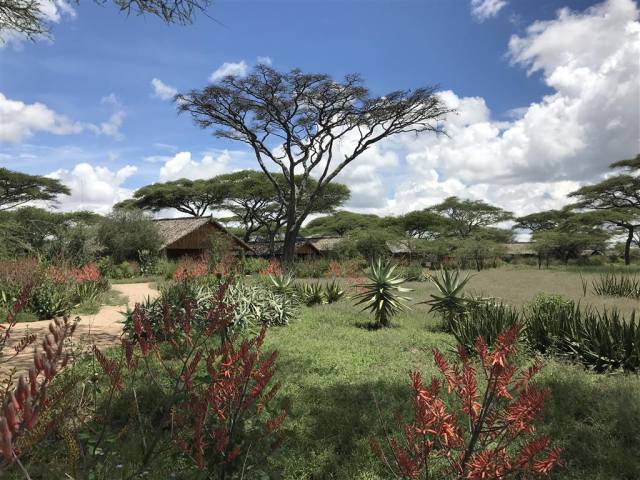 One cannot talk about rainy season without mentioning the mud and swollen rivers… supply cars delayed on the return journey to Ndutu, stopped by flooded rivers and lake like plains, where the only entertainment through the night is to light a bonfire and share stories with other stranded travellers – dry firewood kindly supplied by a nearby Maasai family. Mud that even sees our trusty 6×6 GMC lorry struggling when loaded up with 200L drums of fuel for our generators and landrovers. Mud that makes for entertaining stories around the campfire; stories which grow in the telling so that by the time the stories reach family at home they are truly terrifying adventures!

April is full of joys too that makes it our favourite month of the year. The vast infinite blue of the sky, the early morning light casting the fields of grasses into gold, the Leonotis “Lions Paw” flowers outside my office towering over my head, filled with iridescent sunbirds flitting from flower to flower, the Aloes abundantly in flower …. And the ever present wildebeest, grazing on the front lawn and providing the lullaby to fall asleep to. 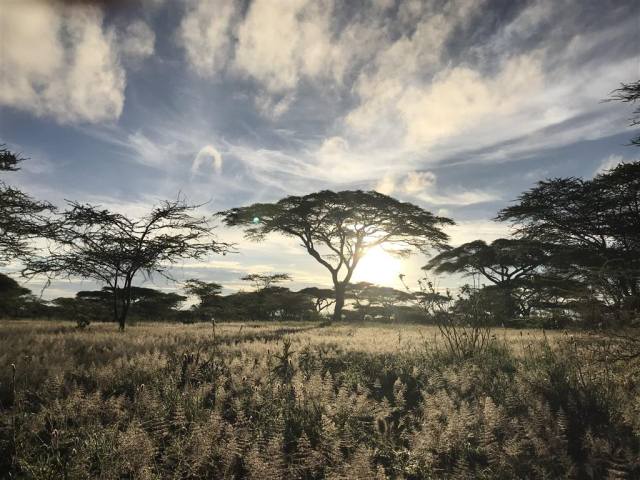 But the very special thing is the profusion of wild flowers, which carpet the area in April and May.

The Ngorongoro highlands are completely covered in a carpet of yellow flowers, which give the impression of being on an alpine meadow in summer rather than in Africa. In the coming weeks the same hillsides may turn white or even pink depending on which flowers are in bloom.

The woodland is a picture at the moment with stands of purple gutenbergia and yellow bidens. Intermingled are varieties of red, mauve and yellow hibiscuses. The plains are adorned with morning glory like flowers called ipomoeas, these along with commelinas and indigofera and many other colourful flowers bring a totally different feel to the African bush. 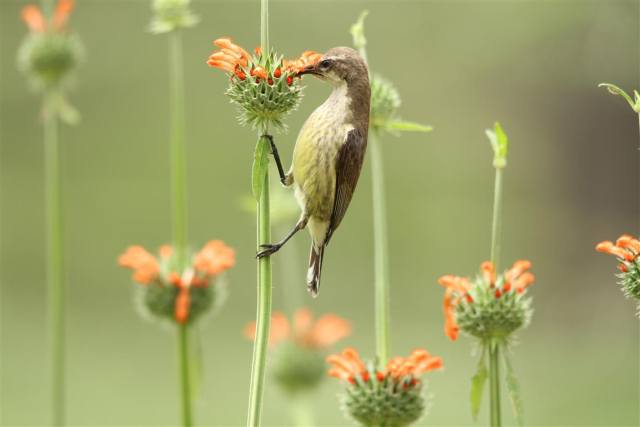 People will often ask about being on safari during these wet months, and whether or not it is advisable and if they will see any wildlife… the answer is a wholehearted YES! It rains generally only in the afternoon, and then usually only for only an hour or so. The rest of the day you are under clear blue skies. The rain, and the mud does not put a stop to game drives, and with the right attitude and the spirit of adventure, game drives are fun, exciting and provide wonderful photographic opportunities.

Tracking the big herds across the short grass plains at this time of year has to be one of the most rewarding experiences in nature. At a distance the wildebeest look like ants spread across the plain as far as the eye can see, and with the rainy season looking like it will last well in to May, we can expect to see this amazing sight for a couple of weeks yet before they start their trek back to the northern Serengeti.

April is also a time when we start our maintenance program. The harsh African weather and environment takes its toll – The wind carries the thatch away, the sun dulls the paintwork, the soda water fades the fabrics, the termites eat all the external woodwork and elephants stand on the plumbing pipes, so there’s always much to do. Staff are also off on their well-earned holidays. This year our end of season celebrations extended over two staff parties; one a good feast of “mbuzi choma” (bbq goat) closely followed a few days later by Hamburgers on the Meadow. Getting out and away from the lodge is always a treat for the guys, but getting them all out at once is quite a mission, and involves the old lorry taking on the role of people mover! A dull grey evening turned magical with a stunning sunset over Lake Ndutu. 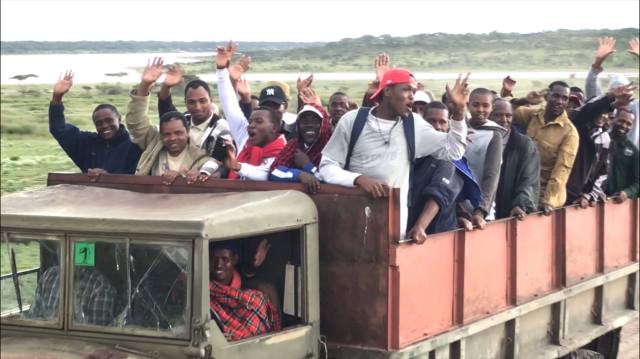 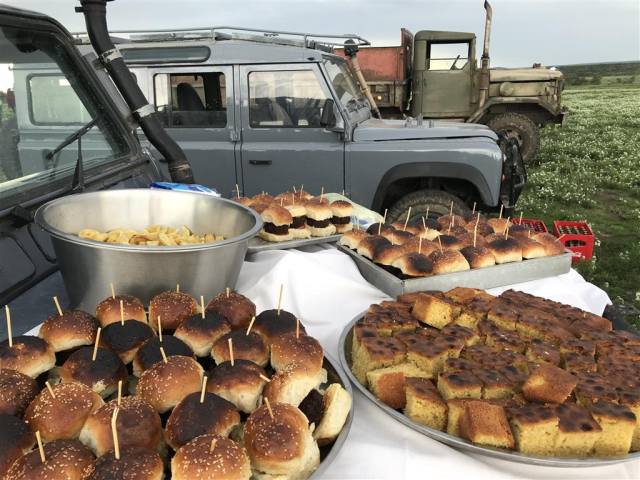 As usual, the stories we follow in Lion Land are fascinating. Back in mid 2017 4 very stunning young Blonde Males staged an easy take over of all three prides (Masek, Marsh and Thin Pride). Remus and Romulus didn’t stand a chance and they didn’t hang round long enough to even try and defend their women or territory. The L-Gang, as they are known, now control the area from Causeway to the Marsh, and all the plains in between. They have mated with the lionesses in these prides and the first of the new babies are just arriving now. Laura and Willow of the Thin Pride have 8 cubs in Long Gully,

Aprodite of Marsh Pride has 2 cubs in the Marsh with Venus and Vesta showing signs of lactating. Nosikitok has not had much luck with rearing her young since her brief flirtation with stardom last year, and we have fingers crossed that she too will produce some young soon. It’s easy to find food right now, when there’s so much game around. By the end May when the rains start to recede along with the migration they will have to eke out a living trying to catch fleet footed impala or the dangerous Cape buffalo, even porcupines and hares feature in their diet. It’s not surprising, that few make it to adulthood. 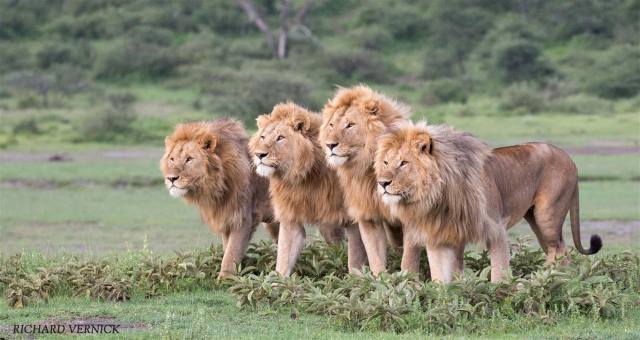 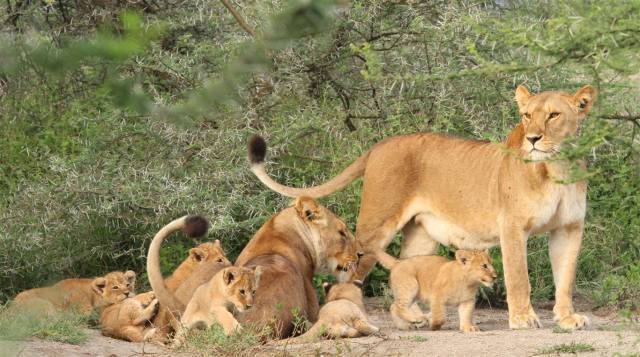 Serengeti Cheetah Project Researcher Dennis, has been visiting Ndutu recently and catching up with our resident spotty friends. It is cheetah heaven out there at the moment with so much easy prey and all our cheetah are in great health.

DM547F desperately needs a name! She and her two big cubs were seen by Dennis last month, having just caught a baby Tommy. The cubs were hungry and couldn’t wait for mum to drop it down!!! Not much more than a snack for three hungry tummies! We saw her first when she was already fully grown around Twin Hills two years ago. We don’t know where she come from but hopefully DNA testing may give us some clues.

So pleased also to know that Dennis recently spotted the gorgeous Polly. We had lost track of her over a year ago, so very happy to know that she is still doing well. 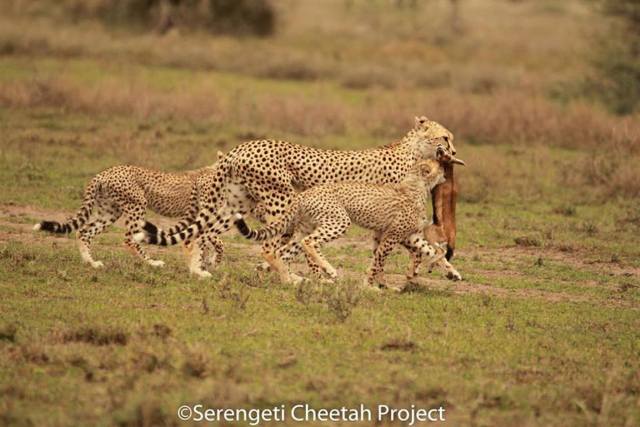 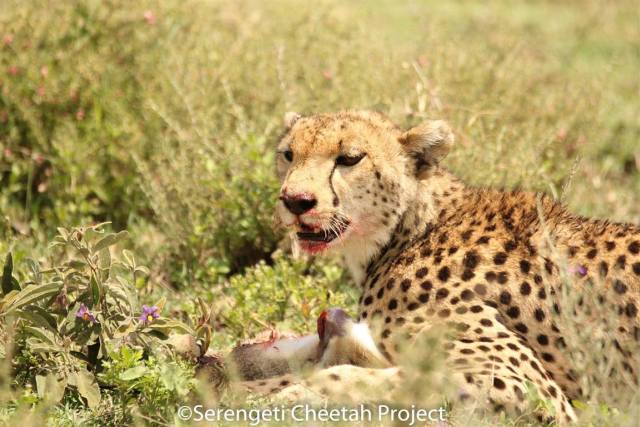 Our dear friends Steve and Yvonne Stephenson spent time with us again this March, celebrating another birthday at Ndutu, his 98th! It was indeed an honour again to have them stay with us and to hear stories of his early years in National Parks Service.

During this time Steve flew over 5000hrs in a Cessna 185 and thanks to Rian from Frankfurt Zoological Society, who arrived one day with his Cessna, Steve was able to fly over many of the areas he covered. From Ndutu to Nasera rock ,the Salei plains, Engarasero and over Lake Natron, up to Malambo where he used to hold cattle auctions for the Masai, over Gol mountains to Barafu Kopjes and Gol Kopjes to Moru kopjes following the Mbalageti and finally Hidden valley back to Ndutu.

It was indeed a birthday to remember, and together with the staff we are looking forward to welcoming them back again next year. 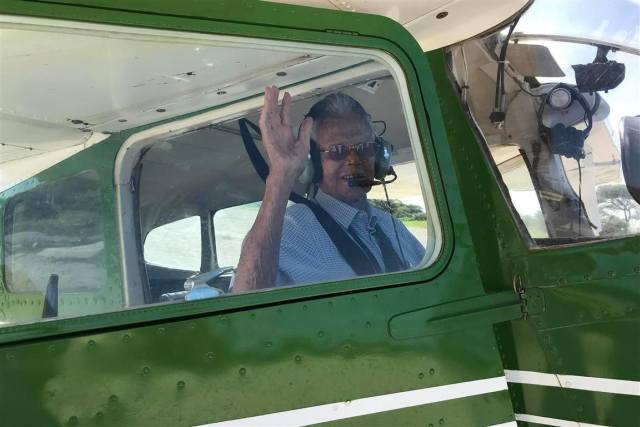 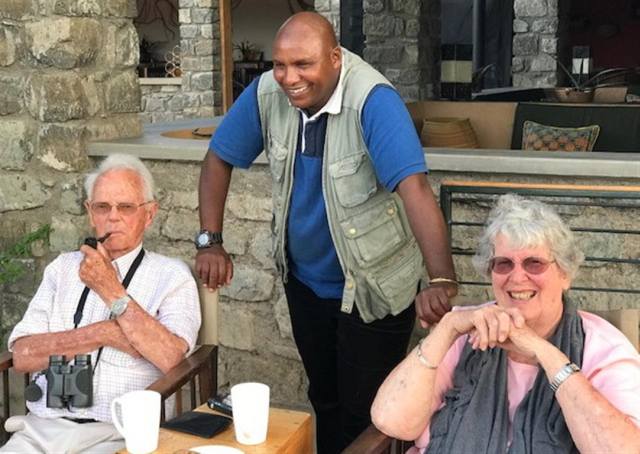 People often ask if we ever get bored living in the middle of nowhere – not a chance. I have just spent 5 days with some guests, helping to guide them around the Ndutu area and it was such a pleasure to be able to share my passion for our wildlife with them, and to share in their joy of discovering things for the first time. And even though I live in amongst it all, every day, the thrill of it all never goes away. 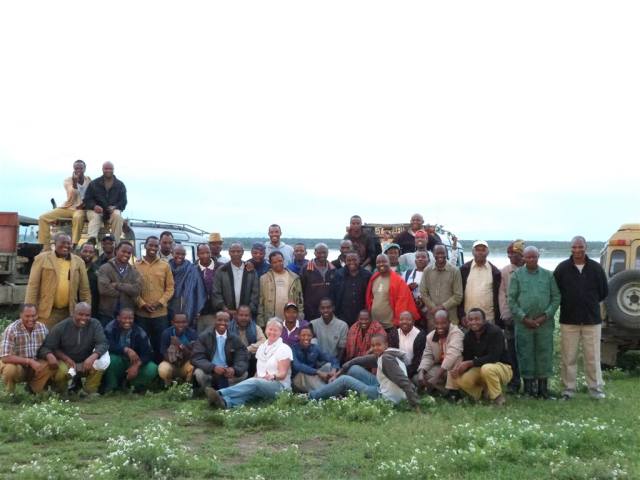